When Will the Online Thought Police Come for You?

I’ve always been a fan of satire. I remember, 40 years ago, posting newspaper clips of photos from the newspaper with my own satirical captions. It helped levitate the mood in our cramped Capitol Hill office.

I remember a few of them; I hope they never resurface.

My two favorite satirical sites, or characters, are Babylon Bee and, from Twitter, @TitaniaMcGrath. The Bee’s take on current events, from a Christian perspective, has built a large following. McGrath, a satirical creation of British author Andrew Doyle, mocks “woke” progressive culture and its rank hypocrisy. He (under the McGrath pseudonym), authored “Woke,” which I think you can still find on Amazon. It is a terrific read. 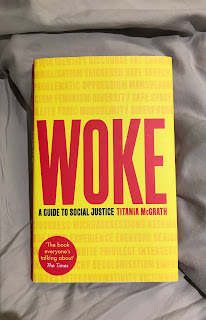 Except McGrath’s twitter handle has been permanently banned from Twitter. Doyle discusses here how the cancel culture is coming for you. Not if, but when.

“When Will the Online Thought Police Come for You?”

Never let it be said that the plutocrats of Silicon Valley don’t have a sense of humour. Just before midnight on Monday, I appeared on Cristo Foufas’s show on TalkRADIO to discuss what has become known as “cancel culture”. We had a thoughtful discussion — though I fear a team of censor elves at YouTube, where it was being streamed, may have mistaken our discussion for an instructional video. For, as it turned out, it was to be the last show before the entire TalkRADIO YouTube channel was suddenly deleted for “violating community guidelines”.

The ban had nothing to do with me. Instead, it seems that YouTube — a subsidiary of Google — decided to “terminate” (to borrow the company’s chilling phrase) TalkRADIO’s account because some of its hosts and guests contradicted “expert consensus from local health authorities or the World Health Organization.” Given YouTube’s recent introduction of new guidelines that prohibit the spread of “medical misinformation that contradicts local health authorities”, perhaps we should not be too surprised.

BY THE SAME AUTHOR

Yet as I know all too well, Big Tech censorship has become a common feature of every form of internet discourse. My satirical online persona Titania McGrath has been suspended from Twitter on at least five occasions, including a “permanent suspension” after she expressed her intention to attend a pro-Brexit rally in order to punch people in the name of tolerance. My assumption is that her detractors often team up and “mass report” her to the Twitter Police. Only the other day, an anonymous user posted an image of a copy of Titania’s first book, Woke: A Guide to Social Justice, after he had set it on fire. It’s a curiosity of our times that those who claim to be “anti-fascist” are so fond of burning books.

Equally striking is the fact that Silicon Valley’s social media giants are happy to embrace this climate. It’s a truism of online life that these companies operate with a sinister lack of transparency, deleting accounts or content at will. Their “Terms of Service”, for example, are purposefully nebulous so that anyone can be said to have violated them at any time. It’s a grim admission to make, but those of us who are repeatedly booted off these platforms often find ourselves accepting the seemingly arbitrary decisions of our overlords simply because it feels as though there is nothing we can do about it.

Occasionally, we might lodge an appeal, asking for more details on how precisely we broke the rules, only to receive an automated response referring us back to the very set of rules we were questioning in the first place. It’s rather reminiscent of Josef K. in Kafka’s The Trial, punished for an unspecified crime that he is not aware he has committed.

But for all of Titania’s alleged sins, I can’t help but feel that TalkRADIO is a rather different beast. It’s an Ofcom-regulated and licensed broadcaster which has accumulated tens of millions of views. Perhaps that’s why YouTube back-pedalled late last night and reinstated the channel.

Its U-turn hardly matters. The point has been made: if Big Tech doesn’t like what you say, it won’t let you say it. Especially when it comes to the pandemic. And yesterday’s TalkRADIO “cancellation” is just the latest example of how Covid has escalated Silicon Valley’s restrictions on speech. Even a Lockdown TV episode featuring Professor Karol Sikora was recently removed from YouTube, probably as a result of his claim that the virus was likely to “burn out” and that levels of public immunity had been underestimated.

You could be forgiven for thinking that a distinguished oncologist and former advisor to the World Health Organisation such as Professor Sikora has something to add to the current debate, irrespective of whether or not one agrees with his analysis. Fortunately, the video was re-uploaded after YouTube claimed that the deletion had been an error.

How Big Tech seduced the Left

Even so, if there is one lesson to be drawn from last year, surely it is that Big Tech censorship is expanding into every aspect of our lives. This has manifested itself in a number of ways, but most notably during the US election when the New York Post’s Twitter account was suspended for publishing an unflattering article about Joe Biden’s son, Hunter, and users were prevented from sharing the story.

It’s hardly surprising that, as Douglas Murray notes in his book The Madness of Crowds, the people employed to monitor content on Twitter’s “Trust and Safety Council” — a designation so dystopian in tone that it almost feels deliberate — are first tested in order “to weed out anyone with the wrong ideological inclinations”.

Inevitably, free speech sceptics have been making the same tired old arguments in response to the temporary TalkRADIO ban, most predictably the mantra that, thanks to the free market, “a private company can do whatever it likes”, including banning its users. Certainly this is true. But leaving aside the bizarre phenomenon of self-identified leftists calling for greater powers for faceless corporations, should this principle really be embraced? Should, for example, Facebook have the right to discriminate against gay people, or certain ethnic groups? Political orientation may not be an immutable characteristic, yet few of us would justify the suppression of political dissidents by the despots of history on these grounds.

In recent years, there has been a growing misapprehension that censorship can only be enacted by the state. But in reality, social media platforms are the de facto public square, and the companies that run them are effectively the arbiters of a substantial proportion of political discourse. This has generated uncertainty among libertarians whose fealty to the free market sits at odds with the fact that those of their persuasion are far more likely to be censored under these conditions. Meanwhile, the predominance of the identity-obsessed social justice movement in Silicon Valley has led to a self-contradictory phenomenon: an avaricious corporate oligopoly comprising those who nonetheless believe themselves to be ‘left-wing’.

And so these companies find themselves in a position to claim that they are platforms committed to the principle of free speech, while at the same time able to behave like publishers who seek to enforce limitations on the opinions that may be expressed. This has its perks, particularly as it means that whenever the likes of Twitter are sued for libellous material posted by their users, they invariably cite Section 230 of the US Communications Decency Act, which ensures that they are not legally responsible for content that they fail to remove.

The law was crafted out of an understanding that, given the proliferation of comment sections on news websites, it was always unfeasible to expect media outlets to be able to ensure that illegal content would not be uploaded. Yet now, this same law is being routinely exploited to enable tech giants to censor with impunity.

There are a number of potential solutions, few of which have been seriously explored. One would have thought that a discussion about a potential Internet Bill of Rights would be sensible, given that the Communications Decency Act is so obviously being abused for partisan purposes. Alternatively, the wording of the Act could be changed so that companies are not liable for specifically illegal material that appears, meaning that banning accounts for ideological reasons, or censoring posts simply because Silicon Valley staff find them offensive, would not be protected by law.

Failing that, we will have to resign ourselves to the solution that Titania McGrath suggested in her first book: “If you don’t want to be censored, don’t say the wrong things”.