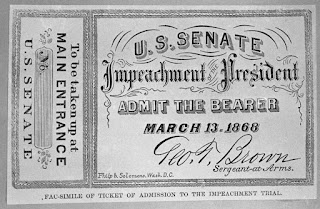 Normal Americans not consumed with politics may understandably be confused about what's happening with the impeachment of now-former President Donald Trump. Allow me to share with you the political machinations likely driving what is, or is not, transpiring.

First, the January 6th breach of the Capitol by a hundred or so extremists opened a political opportunity for Democrats - not just to blame President Trump for "inciting" violence, but to drive a wedge between establishment Republicans and Trump supporters. They rightly figured that House and Senate Republicans, among others, would recoil at the violence and damage done to the Capitol.

They were correct. And they responded with a hurried, even "emergency" impeachment of President Trump. No hearings, no investigation, no Judiciary Committee vote, no due process of any kind. And it passed on a largely party-line vote, with 10 Republicans joining in. Establishment Republicans, including reputed New York Times "conservative" columnist Bret Stephens, praised House Conference Lynn Cheney and 9 of her colleagues for their "courage."

Where people may be confused is this: if it was such an "emergency," why hasn't the trial already been started? That's because Speaker Pelosi has never sent the Articles of Impeachment to the Senate. This is no constitutional or legal requirement for her to do so, although it was announced today that she will solemnly march them over on Monday.

Senate rules require that an impeachment trial of a president must begin the next "legislative day." They are very prescriptive. Meanwhile, new President Joe Biden has a Cabinet to confirm and an agenda to pursue. So there are some cross currents facing Democrats as well. Some believe the Senate can walk and chew gum at the same time, and conduct business between sessions of a trial, but that would require bipartisan cooperation, perhaps even unanimous consent, and that is very unlikely to happen.

Many establishment Republicans are now clamoring for Trump's conviction to ensure he is not a candidate again in 2024 - the very reasons cited by now-Senate Majority Leader Charles Schumer for his support as well. Unity! Healing! Some Republicans agree, believing that excising the Trump "cancer" would help the party rebuild. Some 74.2 million Americans who voted for Trump, the second-highest vote total for a presidential candidate in American history, might disagree.

This places Senate Republican Leader Mitch McConnell onto a difficult highwire act with all sorts of crosswinds. The Republican's most astute political analyst, McConnell is surely on to the Democrats' political strategy. This is about the 2022 midterm elections and keeping the House and Senate under Democratic control. By driving a wedge between Republicans, Schumer and his Democratic allies would love nothing more than Trump supporters to fade back into the woodwork, stay home on election day, 2022, or better yet, abandon the Republican party entirely.

That is a real possibility. By doing so, Schumer greatly tilts the playing field in his direction and forces Republicans to spend precious time and resources rebuilding their badly fractured base.

Some believe McConnell made a mistake by accusing Trump, in a Senate floor speech, of "provoking" the events of January 6th at the Capitol. He may have, but that may also be part of his highwire act to keep his 49 GOP colleagues as unified as possible, between those who might vote to convict Trump and those who believe the process is unconstitutional. McConnell has not signaled how he would vote. He is keeping his cards close to his vest. There are Republicans who see long-term value of excising Trump from politics. McConnell may be one of them. He's not saying.

Reports are that GOP Senators - 17 of whom would be needed along with all 50 Democrats to convict Trump and deny him a future public office and other emoluments - are moving towards a consensus that the impeachment trial of a former President who has clearly left office is unconstitutional. Reportedly, Chief Justice John Roberts has signaled as much and does not want - and may refuse - to preside at the trial. That puts Democrats in charge of presiding over their own trial. They need to think about that.

Meanwhile, the business of the country (or, at least Democrats, who are busy destroying pipeline and energy jobs while revving up their regulatory engines), continues. And President Biden, who made a commendable appeal for unity and ending division, says nothing about a process that clearly is aimed not just at Trump, but Trump supporters, a process that clearly pits "red" versus "blue," which he supposedly wants to end. The words ring hollow for many and may have contributed to almost the worst-ever honeymoon polling for the new President, as recorded by Rasmussen.

So, Schumer's political machinations continue - whether a trial would really advantage Democrats, is genuinely permitted under the Constitution (we're in unprecedented territory here - we've never tried a former President in an impeachment trial), as does McConnell's. We're watching the middle of a high-stakes poker game.

Best guess: the trial happens, because the Democratic base will insist, and Schumer will see more benefit than cost. He may calculate that he will lose on a conviction vote, but mission accomplished - he will get a divisive vote to use against some Republicans in the 2022 midterms (I can imagine the TV commercials now). Republicans will remain divided, and Trump voters angry. Republicans, ultimately, will object to a trial over constitutional concerns, with an assist from the Chief Justice. Schumer will try to expedite the trial. Biden will remain silent, sadly. Republicans wisely will boycott the trial but show up to defeat the motion to convict, which will require 67 votes. It will be defeated, but some Republicans, such as Senators Pat Toomey (R-PA) and Lisa Murkowski (R-AK), and possibly two or three others, will likely join with the Democrats.

That is not a good scenario for the nation. Or for President Biden.

This is Biden's first test of his lofty inaugural address. If he is serious about unity and healing the nation's division, he should call Speaker Pelosi and tell her never to send the Articles of Impeachment to the Senate. He should tell Sen. Schumer that there are more important things to do. Biden and Vice President Harris, who is likely to be the Democratic presidential nominee in 2024 (if not the incumbent President by then), probably is salivating at a chance to run against then-78-year-old Donald Trump after another bruising GOP primary. She's making calculations of her own about a trial, and if conviction looks possible, she may get cold feet.

Biden could do the nation a big favor by calling on his congressional leaders to let this go. Americans of all stripes (except the most partisan) would applaud. Is he up to it? We're about to find out.