Is it Too Late to Restore Faith in Our Elections?

The verdict is in on the integrity of the 2020 election, and it's not pretty. According to a Rasmussen poll from early December, nearly half of Americans believe the 2020 presidential election involved widespread vote fraud (at least in battleground states), including stolen voters and/or destroyed pro-Trump votes. That's despite 57% of Americans generally believing that mail-in balloting mostly worked. 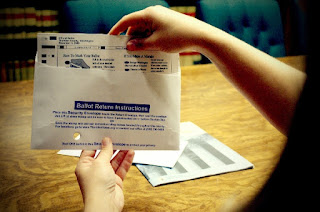 Rasmussen wasn't the only poll demonstrating that a large number of Americans have doubt in the integrity of the election. A Reuters/Ipsos poll suggests that almost a third of Americans believe the election was the result of "illegal voting or election rigging." No matter whom you supported, those numbers should alarm you. And they should alarm the President-elect, Congress, and every governor.

I won't delve into the numerous irregularities of the election in battleground states. You can find that here, here, here, and here. Pennsylvania's election is arguably the most egregious, with the state Supreme Court eliminating the need for signature - or, any - verification of mail-in ballots before they were counted. The state's voter rolls were, and remain, in dreadful condition. And other state voter rolls are no better.

There were plenty of weird anomalies. In Pennsylvania, for example, 40,000 mail votes were rejected by officials during their June 3 primary last year, due to errors (lack of signatures, illegal markings on ballots, etc.). How many were rejected in the general election? About 200, despite more than 7 million votes cast. Reports that more votes were cast than voters casting them continue to reverberate across a handful of states and localities. And not since 1884, when Democrat Grover Cleveland was first elected, has a candidate won the presidency while losing seats in Congress in the same election. Republicans gained at least 10 US House seats and are poised to regain a majority in 2022; not a single GOP incumbent House member lost reelection in 2020. I haven't found where that's happened before.

But here's the issue, and ultimately it is more important than who won or lost: what happens if we continue to allow the erosion of faith in our "free and fair" elections? Is election reform even possible, especially since Democrats (mostly) benefited from the current system? There hasn't been much polling on election reform following the 2020 contest, but here's one: 83% of Pennsylvanians support election reform before the next one.

Why is there so little confidence in the integrity of the 2020 election?

There's no doubt that the COVID pandemic was politicized to push mail-in voting, especially among Democrats. And most states that had little history of mail-in voting were not prepared for it. Or worse, some jurisdictions used it to favor the party in power locally, especially in Philadelphia and Delaware Counties in southeast Pennsylvania. As the Carter-Baker Commission - "Building Confidence in US Elections" - of 2005 outlined, voting by mail increases the potential for vote fraud. The Commission - created just 4 years after the previous election reform commission, and largely in response to the 2000 Florida election debacle and questions over Ohio's 2004 election - clearly did not envision nor recommend instituting broad-based vote by mail systems as some states have instituted, to varying degrees of success. The report is worth your time, and many of its recommendations (and those of the commissions before it) have been implemented, including the 2001 Help America Vote Act.

Perhaps worse, for the first time, many local elections - most in heavily Democratic areas - were subsidized by a non-profit organization funded in large part by Facebook founder Mark Zuckerberg. The organization, the Center for Tech and Civic Life, subsidized nearly half the cost of the election in my county of Delaware, Pennsylvania, primarily to place drop boxes in predominantly Democratic neighborhoods. Allowing private entities to subsidize official election activities is invitation to abuse. In many jurisdictions, some of the Center's funds were used to subsidize get out the vote rallies and other activities typically conducted by political parties.

Another undermining factor was the lack of transparency in the election process. Numerous videos and news stories have been widely distributed of poll watchers being blocked from watching the ballot counting process, especially in places like Wayne County (Detroit), Michigan and Philadelphia. Or they were told to "go home" only to see the counting resumed without them, as happened in Fulton County, GA.  The Trump campaign has been frustrated by the apparent failure of Georgia election officials to provide access to the data bases they used to ascertain the number of 'dead' voters. The Trump campaign documented over 10,000 - the Secretary of State's office there said there were only 2. Trump lost Georgia by less than 11,500 votes.

This is why an Electoral Commission proposed by Senator Ted Cruz and about a dozen other GOP Senators is a worthy idea - to sort through the most significant, potentially race-altering questions and assertions for the truth within 10 days (a tough challenge, for sure, but focused on 6 states, not impossible).

It is too bad we waited until now, just two weeks from Inauguration Day, to discuss it, but I suppose the legal system had to be pursued first. And what a disappointment that turned out to me. While a smattering of state courts did entertain some challenges on the merits, federal courts largely punted, especially the US Supreme Court. "Virtually none of the 'Trump losses' have been judged on the merits or the evidence," notes David Catron for the American Spectator. It is now up to Congress, even though we all know the outcome. Half of Republicans in the Senate and another 50 in the House - where they are outnumbered by 222 Democrats - oppose challenging the electoral count from any state, including conservative stalwart US Sen. Tom Cotton (R-AR).

And when Sen. Cruz's and his House and Senate colleagues' efforts fail, we will only exacerbate the growing lack of faith in the integrity and outcome of the election.

So what kind of election reform do we need, and how do we get it, recognizing that the Constitution delegates to the states the responsibility for conducting elections? Is it even possible, or is it too late?

Let's remember that the debate is always between "voting access" (Democrats) and "vote integrity" (Republicans). Unfettered access without integrity is an invitation to fraud and corruption; integrity without legitimate access is voter suppression. There is a balance. So long as both sides have a reason to engage, there is hope, however faint. After all, Democrats benefited from a dubious 2020 election. But not entirely.

1. Return to the policy of promoting in-person voting, either early or on election day. Voting in person is the most secure way to not only ensure a "free and fair" election, but also to ensure your vote will count. It can't be lost in the mail. Prior commissions have outlined several ways - some which have been implemented - that make it easier for eligible Americans to become registered to vote, and to cast their ballots. Too easy, according to some.

Early in-person voting has worked well. Some states, like Pennsylvania, have a cumbersome "vote absentee in person" system that needs reform. States and counties should set up real voting sites up to 14 days prior to an election, complete with poll watchers, for those who want to vote early. Adding more days - even months - adds unnecessary burdens and costs to an election system, and may deprive the voter of information late in a campaign that could, affect their vote (e.g., the Hunter Biden laptop scandal).

2. Create a federal fund to help states clean up their voter rolls, consistent with Section 8 of the National Voter Registration Act. In addition, voter rolls should be matched annually (no later than 90 days prior to a state or federal general election) against Social Security death records and the US Post Office's National Change of Address Registry. Anyone who had died or has moved out of state is immediately removed from the voter roll. Any state who accepts these funds must agree to their vote by mail systems being certified by the Federal Election Assistance Administration (or, the Federal Election Commission). Without certification - not unlike the Voting Rights Act - state vote by mail systems would be disallowed, at least in federal elections. Verification systems would be required to protect against fraud. Here is where technology may help. I'm open to how this gets done, aside from matching signatures. There should also be national standards for addresses used for registration (residential addresses only).

3. Fix overseas military voting. Every election, we read of stories about states rejecting overseas absentee ballots from active duty military, for any number of reasons. Some of it may be from mismanagement or errors by the USPS. This should be not partisan.

Using federal funds as a carrot to secure important electoral reforms is not without precedent. The Help America Vote Act provided nearly $4 billion for related purposes nearly 20 years ago. But it needs to be expanded.

Yes, there is a role for voting by mail. Ideally, it should be limited to people unable to vote on election day (or, in the event of a pandemic). India, Israel, and most countries of the European Union ban or strictly limit mail voting. But even during this pandemic, there was practically no evidence of viral spread due to in-person voting. In states with clean voting roles and systems to ensure only legal votes are cast, vote by mail can work. And let's dust off the Carter-Baker Commission report and see if there are other ideas that have yet to be implemented that may be worth considering. Let's take a good look at voter ID systems. Election Day registration? Probably not, given their propensity for abuse, but I'll keep an open mind.

After all, we need to restore faith in our elections. A little horse-trading may be in order. It's going to have to pass Congress, after all, so long as we do more good than harm. We just need some good bipartisan leadership, both in Washington and among states. If we can find it.

Posted by Bucknelldad at 6:11 PM