Increased Security Around the Capitol - What It Means 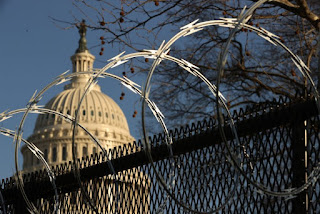 House Speaker Nancy Pelosi conducted a surreal news conference today. While defending the continued presence of nearly 10,000 Army National Guard troops in the nation's capitol, she called for more funding to help protect Members of Congress "from the enemy within."

That brought back McCarthyite statements and tactics from the 1950's (and a certain 1994 movie). Then again, McCarthyism (Joseph, not the "Kevin" variety) has been on full display by Democrats for several weeks now. But since American history is no longer taught in schools, it seems, few of any know the sordid tale of the late US Sen. Joseph McCarthy (R-WI), and his "Army-McCarthy" hearings. It was a dark episode in modern American history, but a turning point.

But those who do not learn from history are doomed to repeat it. And now, we seem to have several new Joseph McCarthy's reaching for the mantle. This time, they're Democrats.

You think I'm exaggerating. Have you checked out "cancel culture" lately, and compared it to the Hollywood "blacklists" of the 1950's? There is practically no difference, except cancel culture can hit anyone. And has.

Stealing a page from her former colleague Rahm Emmanuel's playbook, Speaker Pelosi is not letting a crisis - the January 6th Capitol breach - go to waste. It would appear that the gawd-awful, East German Stasi-style fencing and concertina wire are soon to become a permanent feature in an increasingly military-occupied Washington, DC.

I guess my days of giving after-hours Capitol tours is pretty much over, until the city is liberated by another "free and fair" election. Yeah, I know.

Pelosi's news conference brought back bad memories of my first days as Secretary of Senate in June, 1995. It had only been about 2 months since the Murrah Building terrorist attack in my hometown of Oklahoma City. Washington was all agog over how to prevent Hertz rental trucks full of ammonium nitrate from driving down streets adjacent to where Members of Congress might be found.

You might be surprised to know what the Capitol Police had in mind then. They wanted to close off several streets around the Capitol, including Constitution and Independence Avenues (the main avenues that border the Capitol to the north and south, respectively). They were partially successful, but their goal was to create a separate, walled city around the entire Capitol complex (several US Senators were in favor of that, by the way). I was specifically briefed on the closing of Delaware Avenue, which paralleled the Russell Senate Office building. I opposed it, but I had no say - the decision had been made. I strongly opposed separating Capitol complex offices from people (at the time, we had 4.5 million visitors annually to the Capitol - it reached around 6-8 million. Or, was).

One of my 'accomplishments' was contributing to a study on the need for a new $125 million Capitol Visitors Center to help improve Capitol security and facilitate the visitor experience at this very important working office building. I strongly advocated for it, but the congressional media at the time shrugged their shoulders, and several Members of Congress said he could not afford it. It took two Capitol police officers to be murdered by a deranged killer just two years after I left office to spur action. Some $800+ million later, we have a superb Capitol Visitors Center. Or should I call it a National Guard armory?

These are perilous times. Nancy Pelosi apparently thinks a couple of her colleagues - both women, by the way, including 5'5" Lauren Boebert (R-CO), who wants to conceal-carry around the Capitol (as she did at her restaurant in Rifle, CO, which I hope to visit in April) and the admittedly kooky Marjorie Taylor Greene (R-GA) are enemies of the Republic. Maybe others, but she's not saying. Why punish all 440+ Members of Congress (voting and non-voting delegates)? We've had plenty of kooks serve in Congress and survived the experience. If anything, news reporters may have a bigger history of violence in the Capitol than members of Congress, or even lobbyists.

So, yes, let's improve Capitol security. Clearly mistakes were made that allowed a bunch of clowns and violent actors to overwhelm Capitol Police on January 6th. But let us not over-react, and remember who we are. There is vastly improved technology (drones, anyone?), and there are at least 6 different law enforcement agencies in an around Washington, DC, not including neighboring local law enforcement. We are America. Land of the free. Home of the brave. Where we, the people, govern.

Do not let your Member of Congress, House or Senate, turn our Capitol into their personal enclave, nor permanently establish martial law in your Capitol city. You are not the problem. They may be.

Posted by Bucknelldad at 7:56 PM