Last week’s rushed House impeachment of President (until noon Wednesday) Donald Trump, devoid of due process (thorough investigation, House Judiciary Committee deliberation, etc.), will soon make its way to the US Senate. And under Senate Resolution 479, from 1986, a Senate trial will commence, and quickly, with Chief Justice John Roberts presiding.

Except it is not that simple. While the Senate must take up the impeachment articles the next legislative day they officially receive them, the House has to send them over, first. It took Speaker Pelosi three weeks to send the prior impeachment articles, at least two of them. And no doubt soon-to-be Majority Leader Charles Schumer (D-NY) wants to be sure he’s fully ensconced in his new role (again, noon Wednesday more than likely, once Kamala Harris becomes the Senate President and the tie-breaking vote, and assuming the Georgia Senate runoff elections have been certified and the new Senators are sworn in). 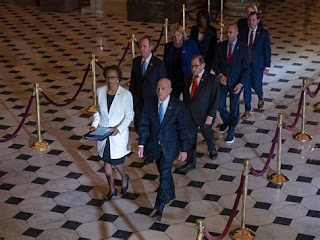 You remember the solemn march of impeachment managers the last time (just as the coronavirus was making it way China to the US), holding the articles like an Incan sacrifice as they slowly made their way to the Secretary of the Senate. We’re about to see that again. I can’t wait.

So, what happens next? The estimable Byron York, reporter and columnist for the Washington Examiner, outlines the Senate’s role in impeachment:

“Remember that the primary purpose of an impeachment trial is to remove the convicted official from office. Here is the description of impeachment from Article II of the Constitution: ‘The president, vice president and all civil officers of the United States, shall be removed from office on impeachment for, and conviction of, treason, bribery, or other high crimes and misdemeanors.’ The Constitution gives the Senate ‘the sole power to try all impeachments’ and says that ‘no person shall be convicted without the concurrence of two thirds of the members present.’ If the official is convicted, the punishment ‘shall not extend further than to removal from office, and disqualification to hold and enjoy any office of honor, trust or profit under the United States.’”

Conviction requires 67 votes - 2/3rds of the Senate. No one believes that it will ultimately succeed, even if it does attract a few GOP votes (at least 17 Republican Senate votes would be required, with everyone present and voting).But Democrats, driven by politics, will endeavor to keep’s Trump’s political carcass alive by hanging it like an albatross around Republican necks.

According to media reports this morning, Senate Democrats are trying to decide how (not if) they will proceed. They have a few options. Some require Republican cooperation. After all, the new President has a Cabinet that requires Senate confirmation, and a legislative item or two (see: massive stimulus package complete with a job-killing if not inflationary $15 per hour federal minimum wage).

Some believe that the Senate could do its regular business between trial sessions. Republicans would have to agree to that, and I don’t see it. Too many Republicans - maybe all of them - will see an impeachment trial for someone who has already left office as unconstitutional. Why agree to proceed the way Democrats want? Republicans may push for an early vote to dismiss the whole charade. I doubt they would be successful - they would need all 50 votes plus one Democrat. Not likely.

Another option Democrats might pursue is the appointment of a trial committee. This has never been done during the prior three presidential impeachment trials but is frequently done for lower-level impeachments, like federal judges. Their job is to amass the evidence for presentation at a trial. Given how rushed the House impeachment was, it appears some Democrats want to accumulate more evidence, or maybe even wait for the official investigations to conclude.

They should be careful what they wish for. It turns out that a Black Lives Matter activist with a history of violence helped lead the Capitol breach. Also, credible reports suggest that the attack on the Capitol may have been replanned and began before Trump’s speech concluded, which supposedly incited the assault. Facts are indeed stubborn things, and perhaps cooler heads (a trademark if not organizational purpose of the Senate - to be the saucer that cools) will ponder this carefully as facts continue to emerge that may contradict the narrative.

Senate Democrats would be wise to proceed cautiously. I strongly suspect that Sen. Schumer has told Speaker Pelosi to hang on to her impeachment resolutions until further notice as the official investigations proceed, if only just to make sure the political trajectory is clear.

Of course, wading through the Democrats’ impeachment articles, their “incitement” of an “insurrection” charges against Trump go beyond his one speech on January 6th. They go back to other rhetorical “excesses.” Never mind the well-documented incitements to violence by several leading Democrats over the past 4 years, or even tacit, if not open support of last summer’s violent incidents. It’s not “whataboutism” to compare the reactions to a different set of incidents. But it is fair to highlight political hypocrisy in their reaction to them when there is a common denominator, in this case, violence. Perhaps they believe that consistency is the hobgoblin of little minds.

So, we will have an impeachment trial hang over an American political psyche in desperate need for political resolution and “healing,” for the foreseeable future. Investigations - real ones, anyway - take time. And when we know what the inevitable outcome of a Senate impeachment trial will be, barring no new jarring revelations. Ultimately, there will be no winners - only more politics and continued anger and division, things we’ve had quite enough of.

This charade should be brought to an end, and hopefully soon. If only we had the leaders willing to do it.

ADDENDUM: Some suggest that Chief Justice Roberts would NOT preside over the impeachment trial since Trump will no longer be President. In that case, as with other impeachments (i.e., judicial), the Senate President or Pro-Tempore (soon to be Sen. Patrick Leahy, D-VT), would preside. The Senate’s rules are not clear on the matter, but could Roberts refuse to preside since such a trial, many believe, is unconstitutional? I doubt that, but President Trump, once out of office, could sue to enjoin the Senate from proceeding. SCOTUS would likely act quickly. Another wrinkle in this sordid drama.