Where Are We Now?

First, apologies for not posting for the past month. I have a reason. I am relocating from Pennsylvania back to Virginia. Protracted home sale negotiations and downsizing into a modest condo from a large single family home, after 18 years of "life," is a very time consuming and stressful challenge. Moving ranks along side the death of a spouse, divorce, and a career change as one of the top most stressful events in life. I think they may be related. 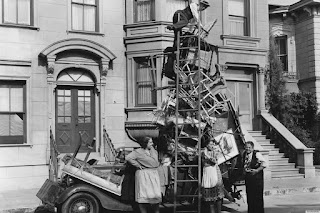 I hope to resume early in the New Year. I have many observations about our bizarre post-election world that I am eager to share, mostly some perspective on why certain things have, or are, happening. And a few predictions.

My election predictions turned out pretty well (see my previous posts) - I said it would be a close election and it was (I picked the wrong winner), I predicted a good amount of election fraud and mismanagement in Pennsylvania. Bingo. And I predicted Republicans would pick up US House seats when few others did. I predicted up to a 9 seat gain; they appear to have won 11 with one in the balance (NY's Brindisi v. Tenney). That it has taken so many weeks to count votes in battleground states and districts is more than embarrassing (Florida and Texas had practically no problems); the incompetence and malfeasance are tragic.

When I get to it, my next post will be on the danger to democracy of the move to deregulated voting by mail. It was mostly a disaster in 2020. Not everywhere, just where it mattered. It interests me that Democrats want to increase regulation of everything except voting. Polling suggests that half of Americans believe election malfeasance occurred on a substantial scale in this election. They are not wrong. And there is plenty of evidence. Here's the latest from Georgia.

My last post featured my friend, Dr. Bill Hamilton, a noted author, historian, retired Army intelligence officer, Vietnam veteran, and more. I feature his latest, again, and am honored to have consulted him on it. It outlines the state of play very well from the perspective of a Trump-Pence supporter. Which I was, and remain.

There remain two paths to overturning "the election crime of the century;" however, both paths are narrow and will require Republican office holders to show why they are entitled to hold office.

When 117th Congress convenes in Joint Session on January 6th, Republican House and Senate members have an opportunity to challenge the validity of the Biden-Harris votes in the Electoral College. Such challenges are not new. On January 6th, 2001, and 2005, Democrats tried to overturn the elections of President G.W. Bush. In 2017, Democrats tried the same with President Donald J. Trump.

On January 6, 2021, Congress will be composed of members elected on November 3, 2020. Win or lose the runoff election in Georgia, Senators Perdue and Loeffler will be eligible to vote.

At 1:00 p.m. on January 6th, Congress assembles in the House Chamber with Senate President Mike Pence in charge. Starting with Alabama, the votes will be counted and announced. When the process reaches a contested State, a GOP member of the House and a GOP member of the Senate could co-sponsor a Motion challenging the validity of the Electoral College votes. But, without a sponsor from both chambers, the Motion is not in order and fails.

In the House, each State gets one vote. The party with the larger partisan congressional delegation casts the vote, meaning the Republicans cast 26 votes and the Democrats cast 21 votes. Michigan, Minnesota, and Pennsylvania are tied. The Senate, by individual member vote, elects a Vice President.

For Trump-Pence supporters, there is, however, a big problem: Majority Leader Senator McConnell told his caucus not to author or co-author any objections. But strong constitutionalist Senators such as Lee, Cruz, Paul, Cotton, Hawley, Fisher or Tuberville might ignore McConnell and honor their oath to defend the Constitution.

But this observer is not hopeful. I am reminded of British Foreign Secretary Sir Edward Grey who, on the eve of World War I, said: "The lamps are going out all over Europe; we shall not see them lit again in our life-time."

Suggested reading: "How the Electoral College Votes and How the Votes Are Counted," by Mark Strand and Timothy Lang, The Congressional Institute, December 14, 2020. The 12th Amendment to the U.S. Constitution, and www.270toWin.com.

Posted by Bucknelldad at 8:57 AM