Seven Thoughts About the Election: Not a Good Night for Democrats or Pollsters

Seven observations about the ongoing election. I'll expound on a couple of these points in later posts. 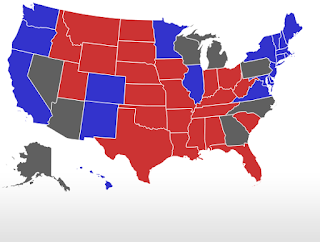 1) Democrats may win the presidency when all is said and done (remains to be seen), but they have to very disappointed at their failure to run the table, and in fact losing down-ballot races, especially here in PA. The GOP is on track for a net loss of no more than 1 in the US Senate, if that, depending on the Michigan results.
2) About PA: Trump currently leads by more than 640,000 votes, with a reported 1.4 million mail-in ballots to be counted. 275,000 of those are from Philadelphia, another 125,000 or so from Pittsburgh. They would need to break 80-20 for Biden to win. That is highly unlikely since almost 40% of those mail ballots are from Republicans. While the potential for fraud remains high, that margin appears too big for Democrats to cheat their way to a win.
3) House GOP gains. They're at +4 and are poised for an additional +2 or 3 (the 7th, 8th & 17th Districts) in PA, with author and veteran Sean Parnell winning in suburban Pittsburgh. GOP challengers are also currently leading in other states, including VA (Freitas). I can see the GOP gaining as much as 9 or 10 seats. They began the election needing 17 to capture control. Nancy Pelosi and her caucus took a big hit.
4) And don't forget gubernatorial and other statewide offices. Republicans gained +1 with a win by Rep. Greg Gianforte (R) in Montana. And watch the down-ballot races! NC elected a terrific black Republican to Lt. Gov. and three statewide offices on the ballot here in PA are all led by the GOP candidates with 400,000 - 700,000 vote leads. We'll see if all three hold - but I bet the GOP wins at least 2 of them, Tim DeFoor for Auditor General and Stacey Garrity for Treasurer. I so want Heather Heidelbaugh to unseat smarmy partisan Josh Shapiro for Attorney General.
5) It wasn't just the Democrats who will take a net hit; the polling industry and political prognosticators, like my friends Charlie Cook and Larry Sabato, need to rethink their models, methods, and analyses. They both relied too heavily on flawed polling and projections were mostly off at all levels. Frankly, I did better. Maybe I need to go into the business.
6) If Biden/Harris win, Democrats cannot be excited about their 2022 or 2024 prospects with a GOP Senate, emboldened House GOP, and no serious mandate for their agenda. In that scenario, the GOP would be poised to capture the House in 2022 and gain Senate seats. No court-packing, no new states, no tax increases. And no anti-Trump vote to drive Democratic turnout.
7) Last note: Congress needs to step up with serious election reform. While Article 1, Sec. 1 gives state legislatures the responsibility for the manner of elections, there are too many states with too many flawed rules and systems. Congress needs to cough up serious money to help states fix bad voter rolls in exchange for national voting standards that are clear and uniform, especially with regard to mail voting and deadlines. This election does not inspire confidence.
8) One bonus point: watch the Supreme Court, especially with pending cases about late-arriving mail ballots in PA and elsewhere. States have had to set aside all mail ballots that arrive after election day but before their deadline (Friday in PA, next week in IA, NC).
A good place to track federal election results:
REALCLEARPOLITICS.COM
RealClearPolitics - Live Opinion, News, Analysis, Video and Polls
Posted by Bucknelldad at 10:15 AM