On the 2020 Election: Grateful, Optimistic, and Satisfied

Most of us remember just 4 short years ago. Much of America, from pollsters and especially to the pundit class and Washington insiders, confidently predicted a win by Hillary Clinton. It was heresy, even mock-worthy, to suggest otherwise.But "otherwise" happened. Much of the left never accepted the results, and the Obama-Biden Administration sicced federal law enforcement and intelligence agencies - a process that began over 3 months prior to the election - to undermine the new President, the transition, and his administration.Nancy Pelosi famously tweeted that the election was "stolen." Members of the left grabbed their Play-Doe, Crayons, and held screaming sessions to relieve their shock. "Trump Derangement Syndrome" became a thing. And it clearly still exists.After that election, Emily Lund compiled reactions by 20 Evangelical Christian Leaders to express how they felt. Perhaps the most interesting reaction, in my view, was that of the US Senate Chaplain, Dr. Barry Black. An African American and retired US Army general. His thoughtful response inspired, if not surprised. And now, that reaction may prove helpful to 2020 Trump supporters who face increasing odds that our favored candidate may have lost an election marred with irregularities and outright fraud. 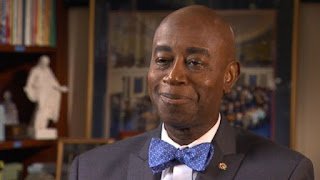 That is a challenge. But Dr. Black in 2016 inspires:
"Donald Trump has been elected president of the United States, and I feel grateful, optimistic, and satisfied.
"I feel grateful because 1 Thessalonians 5:18 admonishes, 'In everything give thanks, for this is the will of God concerning you in Christ Jesus.'"I feel optimistic because of Romans 8:28: 'in everything, God is working for the good of those who love him, who are called according to his purposes.'"I also feel satisfied because Phillippians 4:12 declares, 'I have learned in every state to feel contentment.' In short, after the election of any president, as a person of faith, I know I have nothing to fear."

Posted by Bucknelldad at 6:01 PM