Where Things MAY Stand for the Nov. 3rd (and afterwards) Election: A Prediction

OK, this is where I am at this moment with the Nov. 3rd election. Yes, very close, and here are 10 observations and explanations. 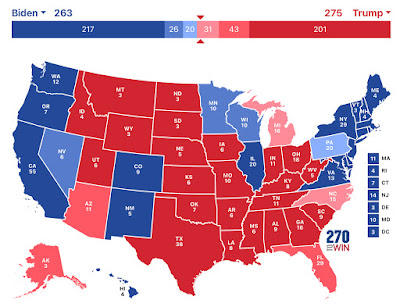 1) If it’s not close, they can’t steal it. It will be close in PA, MN, and NV, and yes, the Democrats will steal those states with widespread voter fraud. They have a certain history of fraud combined with bad voter files in those states (among others). Former Senator Al Franken was elected on vote fraud engineered by the then-Secretary of State, a Democrat, who kept counting and changing the rules until they won. You can look it up.

2) No state has benefited more from Trump’s trade and economic policies than Michigan. They will reward him with 16 electoral votes and a new GOP US Senator, John James.

3) The first state to watch on election night will be North Carolina. If Trump and US Sen. Thom Tillis both win by at least 100,000 votes, that’s a big tell for the rest of the night. If not, that’s a big tell, too. If the latter, I’ll load my guns and go to bed with one eye open.

4) The other state beside NC to watch is AZ. If it goes “blue,” there goes the Presidency. And maybe the US Senate. See 3) for my response.

5) I really think I may be wrong about Minnesota, due to the traditionally Democratic ‘iron range,’ emanating from Duluth towards most of northeast MN. It is trending red, on steroids.

6) My upset of the night: Jason Lewis (R) unseats Tina Smith in Minnesota’s US Senate race.

7) Watch the rural vote in NV. I really think Trump may win NV, based on the reporting of the Las Vegas Review Journal’s John Ralston. If it is not close, the Democrats can’t steal it.

8. If Trump wins PA, which he could, it will because of two reasons: a) massive turnout in the counties outside of Pittsburgh and Philadelphia, and b) western PA’s fear that Biden will eliminate thousands of new energy jobs in that part of the state. It’s a huge factor. Again, if it is not close, they can’t cheat.

10) One last point, added after I posted this. Trump lost a lot of senior votes (+65) from the first debate but especially over COVID. It seems that they are “coming home,” and are largely the reason for the closing of the margins, or growing margins, in many states. That will be the key.

Posted by Bucknelldad at 7:25 PM