The ACB Confirmation - A Bittersweet Moment, and a Senate Fail

Conservatives like me, and most notably conservative women and working moms everywhere, have every reason to cheer Judge - now Justice - Amy Coney Barrett's confirmation to the US Supreme Court. Those of us who adhere to the traditional role of our judicial system under our brilliant Constitution cheer loudest.

But for me, as a former Senate official who loves and reveres Senate tradition, this is bittersweet.

Take a look at this photo. What do you see, or more accurately, not see? 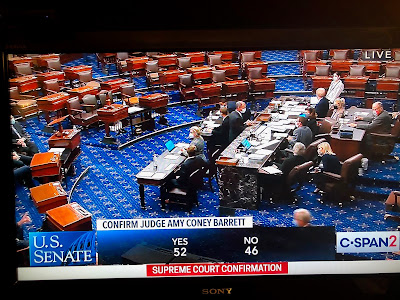 You do not see any Democratic Senators in their seats for a Supreme Court confirmation vote. Every previous Supreme Court confirmation vote I've attended or watched, going back to Robert Bork's defeat, featured every Senator attending the vote in person and voting from their seat, standing when called to cast an "aye" or "nay" vote. It is a great Senate tradition, showing great respect for the gravity of their vote.

I was watching C-SPAN, which doesn't scan the entire floor very often, but it appeared that every Republican followed tradition and voted from their desks.

It has happened every time, including the two most recent confirmations of Neil Gorsuch and Brett Kavanaugh. For the first time in recent history, Senate Democrats dissed and disrespected not just this great tradition, but Amy Coney Barrett, working mom and legal scholar.

This is a sad and notable moment in Senate history. Senate Democrats treated this just like any other vote. This may be one of the worst breakdowns with Senate protocol and tradition since Harry Reid eliminated the filibuster for executive and most judicial nominations. It was Democrats, not Republicans, who made this a sadly partisan exercise. And we are all less for it.

Sure, they were unhappy with the process. They wanted the vote to wait until Joe Biden was elected along with a Senate Democratic Majority (to be determined by you, the voters) so THEY could decide. It was always about the power, not the precedent or the rules, which were clearly, and always, in support of the current Senate Republican majority. That's politics, and they are the rules. The current Congress doesn't expire until the first Tuesday after the first Monday in January, after the November 3rd election.

But one of the great virtues of the Senate has been its respect and adherence to tradition. Thanks to recalcitrant and petulant Senate Democrats - all of them - the Senate's breakdown into an abyss of rank partisanship was obvious, if not complete. It deeply saddens me.

Oh, sure, smarmy Democratic leader Chuck Schumer blames Republicans for all this. We also know precisely what he would have done if the shoes were on the other foot - he was Majority Leader (shudder) working with a President Hillary Clinton (severe shudder) facing a challenging reelection campaign while filling a vacancy left by, just saying, the departure of Clarence Thomas.

Would Republicans have behaved like Democrats and failed to show respect for tradition and the nominee? We'll never know. But I suspect they would have shown up. They always have. In fact, most Senate Republicans voted for the confirmations for every current sitting Justice nominated by a Democratic President. And Ruth Bader Ginsberg. You can look it up. That is clearly not true for Senate Democrats, going back to Justice Clarence Thomas's nomination. Only the late Justice Antonin Scalia and retired Justice Sandra Day O'Connor, over the past 40 years, have enjoyed broadly bipartisan votes from a nomination made by a Republican. You can look that up, too.

You know exactly what he and Senate Democrats would have done. Admit it. As Darth Vader once said, "search your feelings. You know it to be true."

I hope the Senate finds its way back to sanity. It may be awhile. If ever.

Posted by Bucknelldad at 9:12 PM