Legalize Weed? Not So Fast. The Latest from Colorado

Pennsylvania's Democratic Lt. Governor, John Fetterman, has made marijuana decriminalization and legalization his cause celebre. He's spent most of the last two years, since his 2018 election, conducting town halls and participating in others, including one here just last week before our Delaware County Council (5-0 Democratic majority). 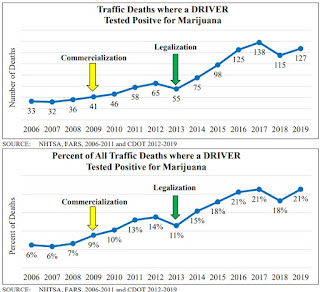 “Decriminalizing marijuana, in my experience after traveling all 67 counties across Pennsylvania, is a foregone conclusion,” Fetterman told the council in pre-recorded comments, adding that he encountered no statistically significant level of opposition in any of the counties.
While there's a case to be made for some decriminalization, legalization is the real goal here. And that's where Pennsylvania and other states could learn a thing a two because Colorado, which legalized marijuana in 2013, has seen a thing or two. And focusing primarily on easing the impact on our criminal justice system completely ignores other consequences.
The Rocky Mountain High-Intensity Drug Trafficking Area is a consortium of law enforcement agencies - federal, state, and local - that runs from the borders of Arizona and New Mexico to the Canadian border. Each year, they publish reports, using official data, to track the possible effects of legalization such things as traffic deaths and societal impacts, like suicides.
They just published their latest annual report. You can read the whole thing here. It is detailed and well documented, including providing data on population growth missing from past reports. Marijuana may not be the cause of some of these more alarming statistics, but the correlations are striking.
The graphs should give public officials some pause about how far public officials should go to legalize weed.
Of course, many politicians see dollar signs by legalizing marijuana. New Jersey got a little greedy a couple of years ago when they placed the tax so high that it turned off large segments of the population and legalization efforts failed, but it was just put on the ballot for the November election, and it's likely to pass.
Tax revenue from marijuana commercialization accounts for .85% of Colorado's budget. Are those dollars worth the consequences?
Posted by Bucknelldad at 9:45 AM