If you had the so-called Commission on Presidential Debates framing the issue that voters may well take with them into the voting booth on November 3rd (or, before) on your 2020 election Bingo card, congratulations. Who thought an obscure, 33-year old non-profit organization might provide the potential galvanizing moment just weeks before Election Day?

As former GOP presidential nominee and ex-Senate Republican Leader, Bob Dole has confirmed, the Commission is in the tank for Joe Biden, or at least against President Trump. 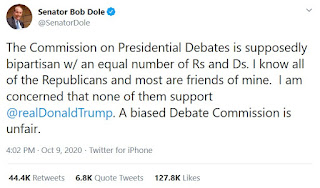 But you didn't need Senator Dole (disclosure: he nominated me to become the 28th Secretary of the Senate in 1995) to tell you that. It wasn't hard to decipher unless you have blinders on, or perhaps suffer from Trump Derangement Syndrome (TDS).

And what is this galvanizing moment? Defining the election as "country versus capitol," with a hat-tip to radio talker and columnist Hugh Hewitt for coining that term.

The misnamed Commission (it's not a "commission" in the way many Americans would define the term) personifies what a large number of Americans despise or loathe about our Nation's Capitol. And as a former 23-year resident of "the swamp" who still owns property there - and now having been away from Washington, DC for 18 years - I understand both camps. My feet are now firmly planted in the "country" camp. Not that long ago, they were planted in the swamp.

Just look at the history and makeup of the commission. It is a privately-funded, non-profit group that was created in 1987 by the chairs of the Republican and Democratic parties (Frank Fahrenkopf and Paul Kirk, respectively). Fahrenkopf, who effectively chaired the RNC as I was becoming of age in DC politics, remains as one of three co-chairs. Like everything else created inside Washington's 62-mile beltway, it was well-intended. It was created as a bipartisan vehicle through which presidential candidates could negotiate debate terms, such as moderators, number of debates, stages, and formats.

And like just about everything else in DC, it lives on and has diverted from its intended purpose, now with arrogance and malice. Unfortunately, it is probably not going away unless and until its funding dries up. Not likely to happen, since they're now running debates in a number of countries.

What else explains the refusal of the commission from choosing even one moderator from outside the beltway? Are there no serious journalists from respected news outlets such as the Dallas Morning News, the Chicago Tribune, Daily Oklahoman (Chris Casteel would make a terrific moderator), or Denver Post? All three anointed moderators come from broadcast media, which as a former print journalist from small towns in Oklahoma, I find that somewhat offensive.

The blatant bias in Chris Wallace's failed performance (no moderator should allow him or herself to become a story); reports of Steve Scully's past history with Joe Biden (and apparent relationship with Trump hater Anthony Scaramucci); and even the more subtle but still evident bias in USA Today's Susan Page's largely one-sided questioning during the vice presidential debate leads to an obvious conclusion.

But the coup de grace was the Commission's ham-handed handling of the decision to turn the second presidential debate into a "virtual" one without consulting at least the Trump campaign, if not also the Biden campaign (I do not know whether Biden's campaign was contacted or consulted in advance - no one seems to be asking). Fahrenkopf appeared on Fox News' Martha McCallum's show and said it was for "health reasons." This, despite the fact that Trump's appearance would be consistent with CDC guidelines about public contact at least 10 days after infection. White House physician Dr. Sean Conley declared Trump  "no longer a transmission risk" on October 10th.

The second presidential debate was scheduled for October 15th.

Hewitt, former House Speaker Newt Gingrich, and others are advocating for the Commission to be abolished. Yes, it's time came and went, long ago. But that's not the issue.

The Commission symbolizes DC beltway elitism, arrogance, and detachment from "normal" Americans. And this detachment is bipartisan. Just look at the list of former GOP members of Congress, former Bush and other GOP Administration officials, and a host of other "never Trumpers" who have endorsed or are supporting Joe Biden for President. And guess what - there is no shortage of lesser-known GOP lobbyists and operatives who are in the Biden camp as well, some of whom even used to work for Republicans in Congress like Bob Dole.

A few of them have their own personal reasons almost exclusively focused on Trump's aesthetics or often abrasive, belligerent style. Others, however, I suspect miss the kind of influence they had with prior administrations, or perhaps have lobbying or consulting contracts that will be advantaged under a Biden presidency. In doing so, they jettison a career of commitment to principles such as less government, lower taxes, and even being pro-life. Some have found a way to monetize their Republican "Never Trump" status (see: The Lincoln Project).

Most are DC insiders, just like the members of the Commission on Presidential Debates. They socialize with each other. They gather together at favorite DC restaurants or each other's homes, connect on the fundraising circuit, and serve on panels together at obscure events hosted by a multitude of well-connected "think tanks." After all, in DC, personnel is policy. It really is "who you know." As a former lobbyist, I get that.

And there's nothing inherently wrong with that. The business world often works the same way, although the private sector expects results and doesn't typically reward excuses and failure. In politics, elections are one-day sales every two, four, or six years. Every day is "election day" in the free market.

But what attracts someone to work and prosper in official Washington? There are many reasons, but may I respectfully suggest, for more than a few, it is because they think that they should be helping run the country. They want to influence and even to control. In a word, power. All for the common good, of course. And if you make money in the process, all the better. Four of the top six US counties with the highest median incomes - all above six figures - are found in the Washington, DC metropolitan statistical area.

For many (certainly not all), that means they believe they're smarter than you. You know, you there, unsophisticated rube, clinging bitterly to your guns and religion, who doesn't have a college degree, or ever escaped your boring little town in flyover country. How else can you explain 30+ years of federal dietary guidelines that are designed to tell you what and how to eat? How have they worked out?

It's no wonder that so many normal Americans feel disconnected to their nation's capital and think Washington despises them.

Posted by Bucknelldad at 3:16 PM