Having lived and worked in the Washington, DC area for 23 years (more if you include the almost weekly commutes from Philly for another 16), it is the architecture that differentiates the city's look from almost all others. 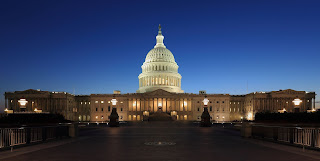 The tallest building in the city remains the US Capitol, the most beautiful and impressive edifice in America, bar none. No American building can eclipse it, in more ways than one. Philly used to have a similar rule about any building taller than William Penn's statue atop city hall, but that ended decades ago. I'll leave it to you to judge the results. Meh.
But it was the late US Sen. Patrick Moynihan (D-NY), perhaps the most intellectual and interesting member of the Senate during the 20th century (or, since), who took a special interest in the architecture of federal government buildings, preferring as I did those structures in a classical style.
There are some good examples of this classical look. The US Commerce Department; The General Services Administration; the National Archives and Records Administration; and the Department of Interior. But there was a period of really, really bad architecture. It occurred mostly during the 1970s, and evidence of it remains at L'Enfant Plaza (12th and Independence Ave., SW), and the Department of Justice and FBI headquarters along Pennsylvania Avenue, around 9th Street NW.
The US Department of Agriculture is another story. It is actually two buildings. The smaller Whitten Building, where the Secretary and senior officials work, is very nice; the main building on the south side of Independence Avenue SW was designed by prison architects. Complete with cell blocks called "wings."

Some agencies have moved from horrific buildings to much-improved confines, such as my old employer, the US Department of Transportation, now found in much-improved southeast Washington, a short walk to Nationals Stadium. The FBI has tried the same, but their relocation has been caught up in a regional real estate battle between Virginia and Maryland.
These mostly 70's (some from The Great Depression, such as USDA) buildings are as ugly as hell. A friend from England once called them "tributes to Soviet architecture." Agree.
I'm no architect nor pretend to know anything about it. But the attached article on efforts to revive a more classical style caught my eye and gave me hope. Somewhere, I suspect Sen. Moynihan is smiling.
And yes, if these agencies are going to get new buildings, I'm very open to seeing them constructed in other cities. Especially the Department of Agriculture.