My friend, Chris Stigall, a popular conservative radio host and podcaster here in Philadelphia, posted another of his excellent Townhall.com columns today on the latest broadside against President Trump. You know, the claim that Trump killed people by downplaying coronavirus. That’s what nutty media and their gullible consumers are saying. 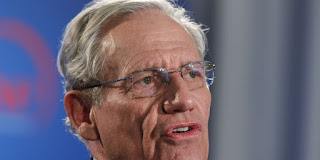 Thing is, I know Bob Woodward. Not well, nor is he a “friend.” But we’ve had interactions that I suspect he might remember (at least one). After all, I’m in one of his books.

Like a lot of other (most) communications and journalism students in the mid-1970’s, I was enamored with “Woodstein” journalism that helped bring down the presidency of Richard Nixon. In part, it inspired me to pursue a career in journalism after I graduated college in 1976, which I did for a couple of years with the Donrey Media Group in my native Oklahoma. I had been editor of my college newspaper, the USAO “Trend.” I worked part-time for the local newspaper, the Chickasha Daily Express, and upon graduation at the tender age of 20, found myself at the flagship newspaper in Bartlesville, OK, where I was both a local reporter and state capitol correspondent for all of Donrey’s 12 (mostly small) newspapers in the state. I finished my career with a stint as managing editor of the Henryetta Free-Lance, before jumping into politics.

Scroll forward about 10 years, when I’m now in Washington, DC, working for the National Republican Congressional Committee. He wrote something, somewhere, that I found incorrect, or out of context (I can’t remember, sadly). I wrote him a letter to express my dissatisfaction. He actually wrote back with a hand-written note, no less. “You deserve a response,” he started the note. That really impressed me (this is obviously before email). Somewhere, I think I still have that letter.

Scroll forward another 10 years. I’m just departed from my favorite position ever, Secretary of the US Senate. Bob publishes another one of his biennial books, in 1996, titled “The Choice.” He chronicles, in his usual detail, the 1996 Dole vs. Clinton presidential campaign from that year. I found myself mentioned - basically, how I got my job as Secretary. It was entirely accurate. I suspect my friend Scott Reed, who had been Dole’s campaign manager, was Woodward’s source. I was never contacted, but no matter, all good. I consider it an accomplishment to have made it into a Woodward tome. I should add it to my resume.

Scroll forward another 15 years or so. I’m on the board of the Canadian American Business Council, and I’m invited with a few others to brief him for an upcoming speech in Vancouver on US-Canadian politics and relations. He impressed. Woodward is a master at making people feel comfortable and extracting the most candor and information from his “subjects.” He is the master interviewer and journalist, even now at age 77. Formidable and impressive.

First, I commend Woodward for releasing the audio transcript of the interview. It puts things in context, which so much of the “blue check” leftist media doesn’t provide. And, sadly, some of my friends here took the media bait. Thus are these times, when the real pandemic is Trump Derangement Syndrome. The last thing a President should is create a panic (or a Vice President, as Joe Biden did back in 2009 when the H1N1 virus emerged. The Obama White House was forced to do damage control when Biden encouraged people not to travel on airplanes, and more. I’ll post a link to that story a bit later).

But here’s my point. We see this pattern every two years. Woodward writes a book. He is published by Simon & Schuster, a highly successful publisher. They want to pump book sales. What better way than to leak salacious tidbits, often out of context, to garner clicks and reads courtesy of gullible or malevolent media (in this case, the Washington Post, but not exclusively), especially right before an election? I couldn’t have planned it better myself. Just read attorney John O’Connor’s book, “Postgate,” on the details of “Deep Throat” and ex-FBI deputy director, the late Mark Felt’s “coming out” (O’Connor was Felt’s attorney). Detailed and very revealing. Woodward aggressively protects and promotes his interests. Most successful people (and corporations) do.

When we finally read Woodward’s book, “Rage,” (and I’ve read nearly all his books, including his most recent, “Fear”), you can bet that it will leave a different perception, with nuance and context missing from the blue-check Twitter media.

I think even Bob Woodward would agree, in spite of his new wokeness.

Posted by Bucknelldad at 8:00 PM