U.S. Sen. Ben Sasse, Republican of Nebraska, running for reelection and a Ph.D. historian, has proposed something I’ve been supporting for awhile now - repealing the 17th Amendment to the Constitution. That amendment, which provided for the direct election of US Senators, was one of several “progressive era” Constitutional amendments, adopted in short order, a bit more than 100 years ago. Most people, I’ve discovered, have no idea that Senators where once chosen not by popular election, but by state legislatures. 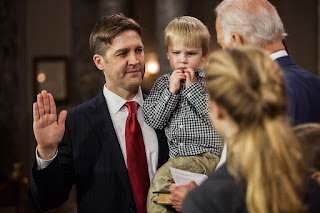 I get why Congress and most states adopted the 17th Amendment. Previously, Article I of the Constitution provided that state legislatures chose US Senators. But the inability of state legislatures to agree on a Senator created a constant vacancies, as documented by the Senate’s Historical Office here:

“(The framers) expected that senators elected by state legislatures would be freed from pressures of public opinion and therefore better able to concentrate on legislative business and serve the needs of each state. In essence, senators would serve as “states’ ambassadors” to the federal government. Unfortunately, problems with this system soon arose, particularly when state legislators failed to agree on a Senate candidate, causing frequent Senate vacancies. By 1826 proposals for direct election of senators began appearing, but it took reformers nearly a century to achieve this constitutional change.”

How has that worked out? The states picked some pretty good Senators prior to the 17th Amendment. Daniel Webster (R-NH); Henry Clay (Whig, KY); Charles Sumner (R-MA); Steven Douglas (D-IL); and future President Andrew Johnson (D-TN), among other famous (and now infamous) Senators.

And people would still campaign for the job. Remember the famous Lincoln-Douglas debate? Their electorate was the Illinois State Legislature as Douglas’s 6 year term came to end, and he sought reelection. The selection of Senators was, frequently, very public business.

The problems leading to vacancies should be able to be fixed with state legislation proscribing how Senators are chosen. State legislatures (and legislators) are not what they used to be. Legislatures with split partisan control would be a problem, but that can fixed by having a Senator from each major party (or, an independent).

The advantages would mostly center around restoring the role of the states in the governance of our nation. As Ronald Reagan famously stated in his 1981 inaugural address, the states created the federal government, not the other way around. So much state authority and responsibility has seriously eroded over time, as we’ve seen with the near neutering of the 9th and 10th Amendments (although they’ve certainly found their footing during the coronavirus epidemic, often excessively).  And Senators would not need to spend all their time fundraising for multi-million dollar political campaigns. They could actually, you know, have more time to do their real job.

Of course, none of this going to happen soon, and you can bet Democrats will oppose it since 60% (or, 59) of the state legislative chambers are controlled by Republicans. Nebraska’s unicameral legislature is non-partisan.

But let the debate begin. We all have a lot to learn and repair, because the Senate is truly dysfunctional, and with the inevitable termination of the filibuster in future years, it will have truly lost its organizational purpose.

Posted by Bucknelldad at 5:19 PM