Does President Trump Really Want His Supporters to Vote Twice?

The usual suspects are outraged over the President’s off-the-cuff suggestion in North Carolina this week that “vote by mail” voters also show up at their polling place on Election Day to make sure their vote is actually counted. 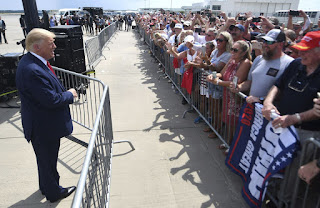 Of course, the usual suspects are yelling (literally) that Trump is encouraging people to “vote twice,” which of course is illegal.

Here’s what this poorly researched and written story misses, especially here in PA. But chances are your state’s law is relatively similar (unless you’re in California, Oregon, Washington, Colorado, Nevada or another genuinely “vote by mail” state, where you cannot “vote in person”).

I have voted absentee here in PA all but twice in my now 18 years of residency. After all, I have been out of the state on Election Day every time, either in NJ, and a few times in Canada or Washington, DC.

So I know the process very well. I mail my application (now available easily on line, but both major parties do a nice job of sending absentee ballot applications, and I’ve already received one from the Pennsylvania GOP). A couple of weeks before the election, the ballot arrives (it now arrives much earlier, thanks to recent changes in the law), with all kinds of instructions, the envelope into which I place my ballot, and the other, larger envelope into which I stuff my envelope-containing ballot. I sign the outside of the envelope so the local officials can compare my signature with the one on file (an integrity procedure that many Democrats in PA are trying to get rid of. I can only imagine why).

The instructions state this very clearly (I paraphrase): even if you vote by absentee, you must vote in person if you are able, on Election Day. That law/requirement has not changed. That’s because here, mail-in ballots are returned to your precinct. If you show up on Election Day after voting by mail - as I did once - they immediately pull your ballot and destroy it (no, I wasn’t trying to vote twice).

It has been long-standing policy, at least here in PA, to strongly encourage voting in person. And it makes sense. Now, of course, our Democratic governor and his sycophants in the legislature are pushing to begin counting mail ballots several days before Election Day, and permit ballots to arrive several days after the election. It doesn’t take a genius to see how this invites mistakes if not fraud (voting twice, etc.).

The biggest reason for voting on Election Day is, of course, ensuring the integrity of your ballot. Ballots are lost in the mail (about 1.5% every election) and several hundred thousand primary ballots just this year have been rejected, usually by voters who fail to follow instructions (such as failing to place the ballot in the “secret” envelope, making illegal marks on the ballot, or failing to sign the outside mailing envelope where required). Another reason: how many times have last minute issues - like October debates - changed your awareness and perhaps your vote? I realize few if any votes will be changed this election, but do you really want to foreclose that opportunity, given how fast moving and developing these issues arise?

So, I have soured on voting by mail, at least in this election. Again, the issue isn’t necessarily the US Postal Service (based on Federal Election Assistance Administration data, some 28 million ballots have been lost “in the mail” nationally in the past four federal elections), but poorly maintained voter rolls by states, including PA, NJ and many others, who probably haven’t fully complied with Sec. 8 of the National Voter Registration Act of 1993 on voter roll maintenance. In addition, as we saw in PA during our primary election on June 5th, local election boards are easily overwhelmed and may not be prepared for a deluge of mail ballots. Do you really want to take that chance?

After all, aren’t most of you working from home these days?

Posted by Bucknelldad at 8:41 PM