Confession of a Mail-In Vote Fraudster (Not Me). It Happens. Learn How and Vote In Person.

The debate over voter fraud, or the potential for it from increasing reliance on "vote by mail" (where you're mailed a ballot you didn't ask for) and "absentee ballots" (where you requested a ballot to be mailed to your home, work, or elsewhere), is highly relevant for the Nov. 3rd election. 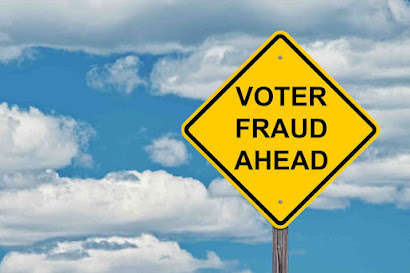 A couple of reasons for that. First, several Democratic governors, especially in New Jersey and Nevada, have instituted "vote by mail" systems, despite the potentially dubious condition of voter rolls in those (and other) states. I am not aware that New Jersey has invested much, if anything, to clean up its voter rolls, very much unlike states who have long employed vote by mail systems (such as Colorado, Washington, and Oregon).
But it doesn't take a rocket scientist to understand how many things can go "wrong" with your mail-in ballot once you place it in your mailbox. If your ballot even makes it to your mailbox. After all, in California, "ballot harvesting" is perfectly legal. That's where someone, usually a paid political organizer, offers to pick up and deliver your ballot. Democrats used this to capture 5-6 previously GOP held congressional seats in 2018. Fortunately, it is illegal in over 40 states and should be.
And having worked in some 35 US House and Senate campaigns in 25 states over 25 years, I've seen evidence of voter fraud, especially in Texas and Louisiana, from congressional and Senate elections in the 1980s. All of my friends who have campaign experience (often more than me) can share stories.
But don't rely on our anecdotes or the Heritage Foundation's superb website that documents well north of 1,000 confirmed cases of voter fraud. Just read this amazing story in the New York Post from a couple of days ago that documents the myriad of ways an unnamed Democratic consultant, apparently from New Jersey but who has employed his "tactics" in New York and Pennsylvania, how local and even state elections can be influenced, even stolen, by several fraudulent means.
This post, largely ignored by most of the media is a bit long, but if you care about the integrity of our elections, the sanctity of your ballot, and are deciding whether to vote by mail or in person, you should educate yourself. I've heard of most, but not all of these schemes. Even I learned a thing or two that I was not aware of.
Know this: If the election is within 1,000 votes or so, and the more local the better, the election can and may be stolen. This post explains how. I've seen it done in states like Minnesota (Coleman v. Franken), Indiana (McIntyre v. McCloskey), and in a special election that I worked in Texas First Congressional District in 1985 (Hargett v. Chapman). And you should ask a few of my friends who worked the Bush v. Gore Florida recount in 2000 about some of their experiences. I wasn't there, so I won't share them here. But, wow.
My Democratic friends (if I still have any) dismiss accusations of voter fraud, and besides, Republicans do it, too! (very rare, but true), But GOP sleaze is usually limited to forging signatures on nominating petitions or bribing postal officials to delay sending out Democratic candidate mailings until after the election (yes, I'm aware of the NC 9th District shenanigans in 2018 involving a sleazy bipartisan consultant in one county. Justice was served).
They say there's "no evidence," and certainly not enough to influence an election. The fact is that voter fraud is very hard to catch and even harder to prosecute. Trust me: it happens more than you know. Just ask yourself why so many people continue to vote beyond the grave in places like Chicago, Los Angeles, Philadelphia, and even Denver. Why do you think the late Governor of New Jersey, Democrat Brendan Byrne, once said that when he died, he joked that he wanted to be buried in Hudson County so he could remain active in politics?
If it is close, Democrats have an obvious strategy. Keeping counting until they win. Change the recount rules if you must; focus on counting absentee ballots from Democratic areas where voters made mistakes with their submissions but focus on "voter intent" and demand they not be disenfranchised for their mistakes (funny how it seems only Democratic absentee voters make such mistakes).
If it is not close, they can't steal it.
Posted by Bucknelldad at 7:03 PM