This is great news. The wheels of truth and justice often are slow to wake and late to the party. But when Justice finally shows up, it is often "game over." 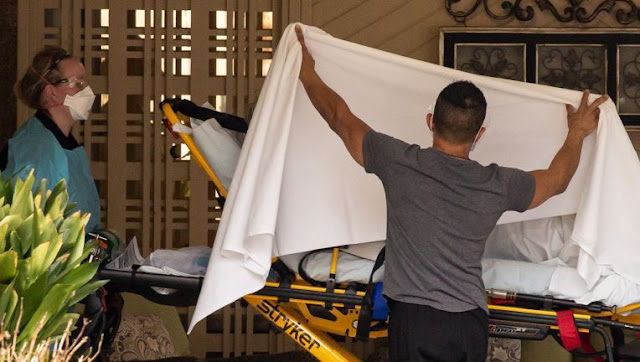 The Department of Justice is now investigating the policies and the decisions by four badly-led states - New York, New Jersey, Michigan, and Pennsylvania - that have resulted in a disproportionate number of COVID deaths among residents of nursing homes and other long term care perspectives.
Here in Pennsylvania, 7,624 people have tragically died from COVID. As of August 26, 5,155 of those deaths - 68 percent of all COVID deaths have occurred in long-term care facilities. The vast majority were 75 years of age or older - among our most vulnerable citizens. Most had cormidities.
How did that happen? The governors and health secretaries of those states ignored guidelines from the Center for Medicare and Medicaid Services - part of the US Dept. of Health and Human Services - and ordered COVID-positive long-term care facility residents back into facilities that were unprepared. The associations representing these facilities strongly opposed the policy. I have posted on all these facts, with documentation, previously.
Here in Pennsylvania, they actually had a plan to deal with this circumstance. It was ignored. Worse, Health Secretary Dr. Rachel Levine rescued her mother from a nursing home and placed her in a hotel while she forced COVID-positive patients into nursing homes across the state.
Now, you might think that the commonwealth's attorney general, Josh Shapiro, would investigate the actions of the governor and his health secretary that contributed to over 5,000 deaths, again in violation of federal guidelines. You would be wrong. AG Shapiro, fresh off a defeat at the Supreme Court when he tried to sue "Little Sisters of the Poor" over their exercise of religious freedom, chose to focus his sites on the long-term care facilities that Governor Wolf and Secretary Levine victimized.
God bless Attorney General Bill Barr and the Department of Justice for stepping in to investigate and, hopefully, hold these states accountable for the egregious policies and decisions that have resulted in the deaths of tens of thousands of vulnerable senior citizens.
Let's hope this investigation will be completed before a Democratic president can - and will - shut it down. These are very bad people and they need to be held to account. The families of these 5,155 victims, at least in Pennsylvania, deserve no less.
https://www.breitbart.com/health/2020/08/26/doj-looking-into-4-democrat-states-policies-on-nursing-homes-and-coronavirus/
Posted by Bucknelldad at 9:35 PM