I haven't encountered much violence in my life. But, I have. As a news editor in Henryetta, Oklahoma (The Daily Free-Lance) in the mid-1970s, I used to ride along with Oklahoma Highway Patrol officers on my day off (Monday). Quite the experience. The speed traps were always fun, but that's not what this is about. 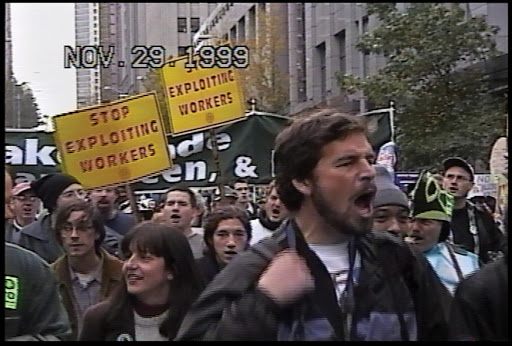 My first encounter with violence was when I was invited to join state troopers on a manhunt for 3 escaped prisoners from the state penitentiary in McAlester, about an hour away (by vehicle). We found one of the prisoners with a bullet to his head in a shack near Coalton, Oklahoma. Coalton doesn't really exist anymore (it's near Dewar), whose hay day was during a brief 1920's coal boom when it's population approached 10,000, for a very short time.
It's amazing what nature can do to a dead body on a hot August afternoon. I'll leave it at that. I took photos for the state police (one of which they let me use for my newspaper the next morning).
But my second experience with "violence" was in the city of Seattle in 1999. The World Trade Organization (WTO). You know, the same city that had a "summer of love," or a "block party," known as CHAZ (Capitol Hill Autonomous Zone) just this summer. At least 2 people were killed, including a teenager.
In 1999, my then-employer, the National Food Processors Association, sent me to lobby at the WTO meeting (I was the Executive VP for Government Affairs & Communications). We were advocating for sound science on food policy issues. But I would spend most of my time in my hotel room (a Hotel W, as memory serves), since the anarchists showed up to violently riot and destroy businesses throughout downtown Seattle, with little resistance from the surprised and unprepared local police. The WTO proceedings were largely canceled.
I personally encountered one numbskull who got in my face and shouted something unintelligible. I shoved him to the ground. He ran away.
These folks were called "anarchists" back then, notable for their black attire, masks (ahead of their time!), and notable spray-painted "A" with a circle drawn around it. You know the thing.
This was Antifa's coming out party in the US, even though they've been around, internationally, for decades.
So, imagine my disappointment to hear a friend of mine (OK, more of an acquaintance), Hugh Hewitt, on his nationally syndicated radio show (AM1260 for you folks in DC, 6-9 a.m.), say that what happened in DC last Thursday was some organic local event of local activists.
Naivete on steroids. This is a well organized, international, well funded, and well-trained cabal that knows exactly what it is doing. Blogger and former Secret Service agent Dan Bongino, who attended the President's acceptance speech at the White House on Thursday, reported in detail his experience with the mob as he exited the White House event, including seeing a few of them at his expensive downtown Washington hotel the next morning.
This is a trained, well-funded, violent, and organized mob. They have been planning and training for this, for years (since Seattle in 1999). Spend some time learning what Bongino and Sen. Rand Paul experienced. And they are closely associated with Black Lives Matter and other Marxist organizations.
You should educate yourself. Start here. Pay attention. Prepare accordingly. These folks have cleverly covered their tracks, but stay tuned. They're not finished. Not even close. Neither, I suspect, is the Departments of Justice and Treasury. Follow the money.
Posted by Bucknelldad at 9:19 PM