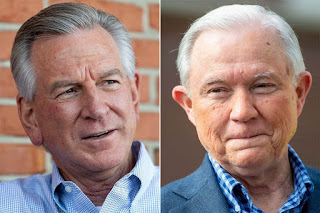 While I’m a Trump supporter, he’s a flawed leader. Every leader has been. And there is no better example of a major Trump flaw than Alabama’s GOP nomination election today, won by neophyte and ex-Auburn football coach, Tommy Tuberville.

Trump’s biggest failing, aside from his lack of discipline and obvious narcissism (no worse than Obama, frankly), his lack of loyalty to his earliest supporters - treating everyone as disposable - is disturbing.

Former AG and US Senator Jeff Sessions, whom I’ve known and highly respected since his first election to the Senate in 1996 was the first and only US Senator to support Trump for the GOP nomination.

I get the whole recusal issue that led to Trump’s anger, and he has a point. Sessions should never have agreed to be AG or should have resigned much earlier, in retrospect. But that was no reason to urinate all over a terrific Senator and loyal supporter. He’s not the first recipient of this Trump characteristic, and he won’t be the last.

So, now, the GOP has nominated a total neophyte who probably wins and probably serves well, once he experiences the usual rookie mistakes during his first 2-4 years.

Meanwhile, the Senate will lose the service of someone who gets the global and domestic challenges we face and would have been ready on Day One. Major fail, Alabama. Your loss. Ours, too.