Happy Birthday - and Thanks - to Senator Bob Dole

I’ve enjoyed the plethora of wonderful birthday messages from former Capitol Hill colleagues for my former boss, former Senate Majority Leader Robert J. Dole. It was Leader Dole who nominated me to become the 28th Secretary of the Senate, the greatest honor and privilege of my life (behind my marriage and the birth of my two sons) that puts me permanently in his debt. My time was brief (he would resign about a year later to pursue the Presidency full-time), but memorable. A post for another day. 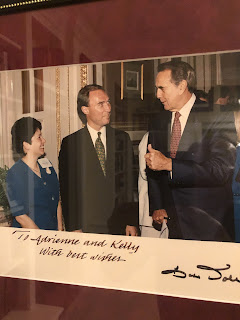 While I was not - nor could be - directly involved with the Dole Presidential campaign in 1996, I did launch the first-ever Republican Senator’s “cloakroom” for the GOP convention that year in San Diego. It was a terrific success, which Dole loved, since it allowed us to better coordinate (um, control?) the role of his colleagues at the convention. My GOP successors have continued that tradition (although I fear it will be necessarily paused this year given the current pandemic).

But obviously I watched the campaign that year very closely. One of the biggest attacks on Dole was that he was “too old” to be president. Born in 1923 (on this day, obviously), making him 73 on Election Day in 1996. This ancient NY Times story tells the story.

How old is Joe Biden? I’ll say it - Sen. Dole does media interviews, perhaps more than Joe Biden, and unlike Joe, remains as sharp as ever. At 97. Happy birthday, Leader.
Posted by Bucknelldad at 8:29 PM