Those of us of a certain age may remember Chairman Mao Zedong’s “Cultural Revolution” in the People’s Republic of China. Zedong, as you will recall, came to power during the 1949 Communist revolution, sending Chiang Kai-Shek and his army and followers to what is now the Republic of China on Taiwan. Chiang ruled China from 1928 until Zedong fomented his revolution. 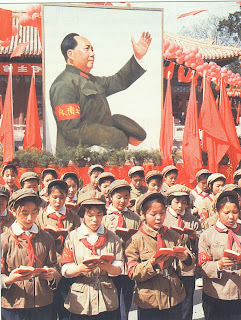 Around 1966, as this article outlines, Mao launched his “cultural revolution” to eradicate the country of its old systems (sound familiar, already?) and eradicate remnants of opposition or resistance that still remained in China. It lasted about 10 years, and had a horrific impact - as many as 20 million Chinese died, but no one really knows for sure.

Historical monuments of all kinds were destroyed. Parents were forced to watch as their homes and livelihoods were destroyed, and were humiliated into phony confessions. It was truly evil.

Since this movement became of age when I did, I was fascinated by it. While in college, I procured and read Mao’s “Little Red Book.” I found it bizarre, full of inane and meaningless statements, but the youthful “Red Guard” would memorize each word (and woe to them if they didn’t).

Mao’s revolution actually didn’t survive that long. Richard Nixon’s trip to China late in his presidency (and Mao’s life) helped China change when it became abundantly clear that Mao’s revolution was, in actuality, a cultural and economic disaster. Within a few years, the revolution had all but disappeared. When I traveled there in 1995, on a Senate staff trip, China was, at least temporarily, on a very different path towards some marginal embrace of capitalism (they wanted foreign investment and were eager to create jobs and social stability at the time, minus respect for the rule of law). Things have obviously changed again over 25 years, but that’s a topic for another day. Interestingly, when I visited, they were fully engaged in restoring historical artifacts and excavating tombs of emperors that now line the road in Shaanxi Province from the airport to the ancient capital of Xian. The famous Terra-cotta Warriors were excavated and restored there. Amazing history that was almost destroyed.

My point. Those who do not learn from history are, in fact, likely to repeat it. We are clearly seeing the “red shoots” of a cultural revolution in our own country, complete with our very own “Red Guard.” The evidence is beyond obvious. To be forewarned is to be forearmed.

Before you bow to the Woke Mob, take a little walk through history.
Posted by Bucknelldad at 7:36 PM