Some of us are still on a modestly (mercifully) relaxed version “lockdown,” especially here in southeastern PA. We get to visit restaurants again, but only those without limited outdoor dining. Adrienne and I made our first restaurant visit to nearby West Chester this evening since early March.

But hours and other services are still shutdown or very limited, and most stores other than big box 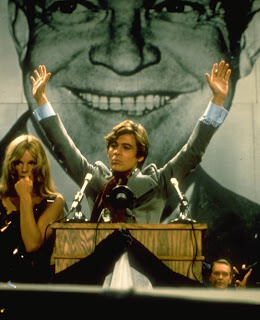 and grocery stores are still closed. Even under our Dear Leader’s “green” phase, some stores won’t be able to open more than 50% capacity, among other restrictions. It is increasingly clearly Gov. Kim Il Wolf’s plan is to permanently keep us control until he leaves office in 2023; he has no plan to graduate us to “normal.” But enough of that.

Movies are still a thing, and you may be scrounging around for something of some relevance to our “current unpleasantness” to keep you occupied during the never-ending “Great Hunkering.” May I commend, “Wild in the Streets?”

I remember watching and being mesmerized by this movie as a 12 or 13 year old during the most tumultuous year - until now - of our Boomer generation lives. 1968 featured the assassinations of Martin Luther King, Robert F. Kennedy, the height of the Vietnam War, race riots that destroyed Camden, NJ, the H Street corridor in Washington, DC along with many other cities, and a presidential election. And probably more if I thought about it.

This movie has some relevance to today, minus the identity politics and intersectionality of today. Maybe have your resident Millennial watch it with you - they’ll discover that there really isn’t anything new under the sun.
Posted by Bucknelldad at 10:38 PM