Fellow Pennsylvanians, Do NOT Get Excited About Our "Green Phase"

A father's day story. And a "Green Phase" story - a warning - for my fellow Pennsylvanians.
Our esteemed Governor announced Friday that my county (Delaware), along with the rest of southeast Pennsylvania, was moving to the 'green phase' of his COVID recovery phase, beginning next Friday, June 26th. Yay.
But it may not be what it seems. 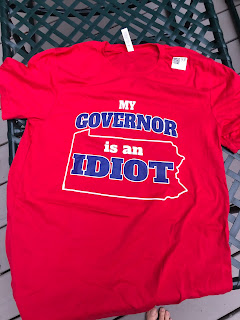 Under Gov. Wolf's scheme, nearly all retail outlets are allowed to open at up to 50% capacity, including hair salons and other services, with a whole host of prescriptive mandates (mask-wearing and the like). We are supposed to celebrate this advancement under our occupation.
Tired of waiting for a badly overdue haircut (no photos), I explored my Hair Cutter app to see if the neighboring state of Delaware, which allowed similar limits to the opening of hair salons six weeks ago, would allow me to make a reservation. Fortunately, Gov. John Carney removed his unconstitutional ban on Pennsylvanians visiting Delaware businesses on or about June 5th.
Presto! I found one in Newark, Delaware that was taking reservations! I thought I had one planned for today. But to my surprise, they remain closed, for at least another week.
Why? Because of Delaware Governor John Carney's (Democrat, of course) policies, (eerily similar to General Secretary Kim Jong Wolf's "Green Phase"), the vast majority of hair salons have chosen to remain closed. Why? Because they clearly cannot profitably operate under onerous, prescriptive, and stifling restrictions, not science-based, that make opening not worthwhile.
My fellow Pennsylvanians who think that we're close to "returning to normal" under Gov. Wolf's "plan" are in for a very rude awakening. And there is nothing planned after the "green phase" to return to "real" normal, which equally onerous Lt. Gov. John Fetterman warned us on national television weeks ago were unlikely to happen "if at all." They claim to wait for a successful vaccine. Yeah, sure. The next excuse will be interesting. And predictable.
So, do not get too excited about the "green phase," unless our Democratic-controlled State Supreme Court surprises us all and declares Gov. Wolf's Emergency Declaration, per the state legislatures' recent vote, over. I'm not counting on that, given how partisan and disrespectful of the state Constitution our state's highest court has demonstrated.
Elections matter. And 2.5+ million unemployed Pennsylvania workers, and thousands of shuttered business owners, are paying a steep price for the last one. And so have the rest of us.


Easing of hair salon and barbershop rules don’t go far enough for many businesses to open
Posted by Bucknelldad at 8:54 PM