The media jumps all in on partisan bias

Along with a couple of my friends, including one-time mentor, friend, fellow native 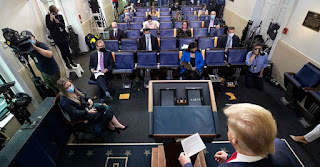 Wise Words on COVID from an Economist. Seriously.

This originally appeared on Ricochet.com 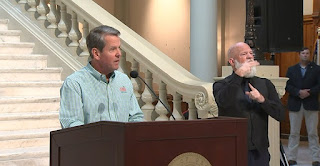 Perhaps you remember this story in The Atlantic a few weeks ago, as Georgia Gov. Brian Kemp
announced his state was going to begin reopening towards the end of April following a gubernatorial-led national shutdown of our economy. This paragraph is notable:

Kemp’s order shocked people across the country. For weeks, Americans have watched the coronavirus sweep from city to city, overwhelming hospitals, traumatizing health-care workers, and leaving tens of thousands of bodies in makeshift morgues. Georgia has been hit particularly hard by the pandemic, and the state’s testing efforts have provided an incomplete look at how far the virus continues to spread. That testing capacity—which public-health leaders consider necessary for safely ending lockdowns—has lagged behind the nation for much of the past two months. Kemp’s move to reopen was condemned by scientists, high-ranking Republicans from his own state, and Atlanta Mayor Keisha Lance Bottoms; it even drew a public rebuke from Donald Trump, who had reportedly approved the measures before distancing himself from the governor amid the backlash.

You can read the full story here if you wish. It’s a great example of media alarmism.
The author, Amanda Mull, and The Atlantic (which announced it was laying off 17 percent of their staff today as they slouch towards bankruptcy) accused Gov. Kemp of engaging in “human sacrifice.” Never mind that Colorado’s Democratic Governor, Jared Polis, who announced his own gradual reopening at the same time, escaped media hysteria.
Thursday, Gov. Kemp held a press conference where he outlines the state’s progress, both with its reopening but also its COVID-19 response. Here’s what “human sacrifice” looks like: fewer than 1,000 Georgians are hospitalized from COVID, a number that’s been in steady decline since he announced his reopening. There has been no spike, no increase, no massive “human sacrifice” in Georgia, or anywhere else that has begun to reopen their economies. Which makes you wonder about the efficacy of these lockdowns.
You can watch today’s press conference via an Atlanta broadcast station here.
If there is a state that has engaged in “human sacrifice,” it would be Pennsylvania, where Gov. Tom Wolf ordered COVID positive long-term care patients back into their facilities against CDC guidelines. You read that right — in violation of guidelines issued by the Centers for Disease Control. The result: 68 percent of our COVID deaths in PA come from nursing homes; upwards of 80 percent in counties such as Delaware, where I live, which skews older and has a large number of long-term care facilities.
If anyone is guilty of “human sacrifice,” it is Gov. Wolf and his grotesquely incompetent Health Secretary, Dr. Rachel Levine. Levine, in particular, moved her 95-year-old mother out of her nursing home into a hotel as the “human sacrifice” unfolded. Pennsylvania actually had a remediation plan to protect vulnerable seniors as COVID-positive patients were moved back into long-term care facilities, but, oops, failed to implement it. And it gets worse: Gov. Wolf reversed a previous decision and promised to increase testing in long-term facilities, but it turns out it wasn’t much of a plan.
As of May 21, Georgia has experienced 1,779 COVID deaths; Pennsylvania, 4,869. Pennsylvania has more nursing home deaths than the total number of COVID deaths in Georgia. Their populations? Pennsylvania has 12.8 million residents; Georgia, 10.7 million. And guess which state is testing more of its citizens? If you guessed Georgia, you’d be correct — 3,595 of its citizens per 100,000 population, compared to Pennsylvania’s 2,731.
The evidence is in on which state really engaged in “human sacrifice.” It’s not Georgia.
Posted by Bucknelldad at 10:29 PM No comments: